Skip to content
Back
Posts Right to Energy Forum 2022: The future of energy

This year’s event took place online, which meant that it was very accessible and reached a lot of interested parties.  The focus was on the issues of energy poverty, from the present state of affairs, with people paying disproportionally high sums for energy, to the green prospects of the future, the main message being that clean and affordable energy is a human right.

What is the Right to Energy Coalition?

Right to Energy Coalition unites relevant stakeholders such as social housing providers, NGOs, environmental campaigners, energy cooperatives and others across Europe. They campaign to tackle energy poverty at an EU, national and local level.

The Coalition aims for an energy system that puts people and planet first. The Coalition was formed in 2017 to advocate for energy poverty in the 2030 EU Clean Energy package. Since then, coalition members have successfully campaigned to ban disconnections, implement free of charge renovations for energy poor households and include the energy poor as key players in the EU Green Deal

Current work includes working with the EU Green Deal and other energy efficiency legislation, as well as advocacy in member states, like local community campaigns to secure the right to energy for energy poor households during the COVID-19 pandemic. 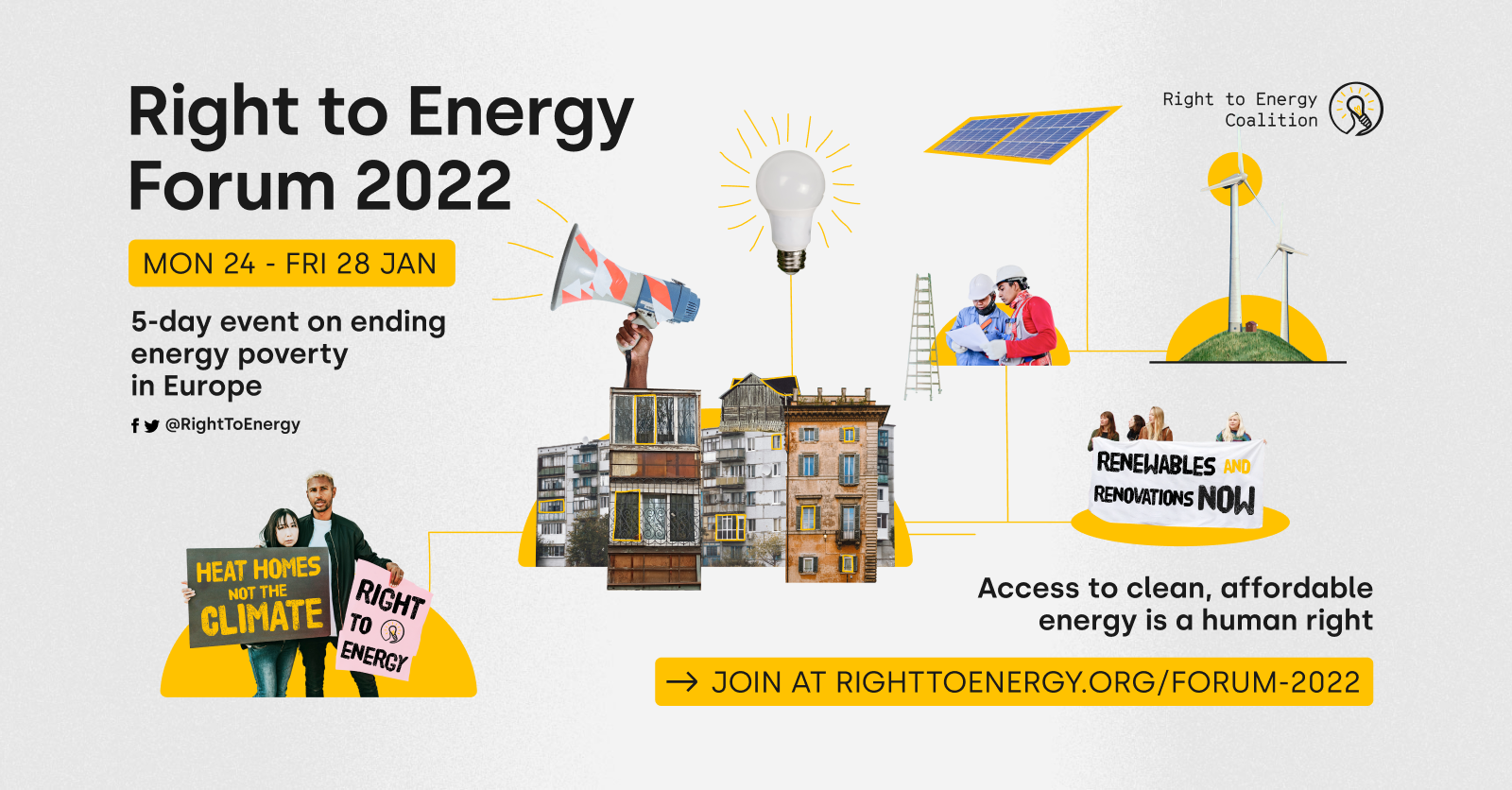 The Forum took place during five days, each day dealing with a different aspect of how energy related issues should be tackled. We could here from number of speakers from all sorts of institutions, not just the members of The Coalition, but also from MEPs from the European Parliament, national decision-makers, European Commission representatives and others, showcasing how relevant both the event and the discussions taking place within it were.

We would like to highlight some sessions that really pushed the envelope. 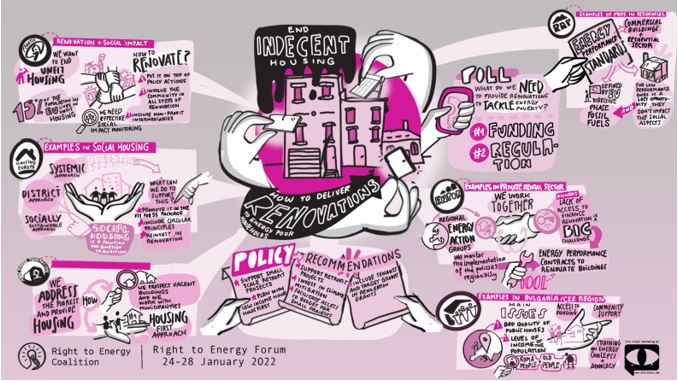 There were many ideas also on how to renovate the housing stock. The Regulatory Assistance Project for example, recommends renovating the worst performing buildings first.

Mincho Benov from Habitat for Humanity Bulgaria argued that the main issues in Bulgaria, highly corresponding with those of whole region of Central and Eastern Europe, are the high numbers of prefabricated multi-apartment buildings, extreme energy poverty and low incomes. The challenges have solutions in combining access to interest-free microfinancing for home improvements with life-skills training deliveries, tech advice and housing mediation and community support, advocacy work and campaigning to raise the awareness of the need of differentiated support focused on the poor households and secure the proper design of the residential energy efficiency programs, among others.

Discussion of Members of the European Parliament: Is Fit for 55 fit to tackle energy poverty?

This panel dealt with a policy package that has been thoroughly discussed across Europe, Fit for 55, which is a part of the EU Green Deal.

This session was moderated by Clotidle Clark-Foulquier (FEANTSA) with 3 distinguished Members of the European Parliament, namely Michael Bloss (Greens, Germany) Radan Kanev (EPP, Bulgaria) and Cornelia Ernst (The Left, Germany), who brought their breadth of experience and idea onto the table.

Some of the key takeaways: 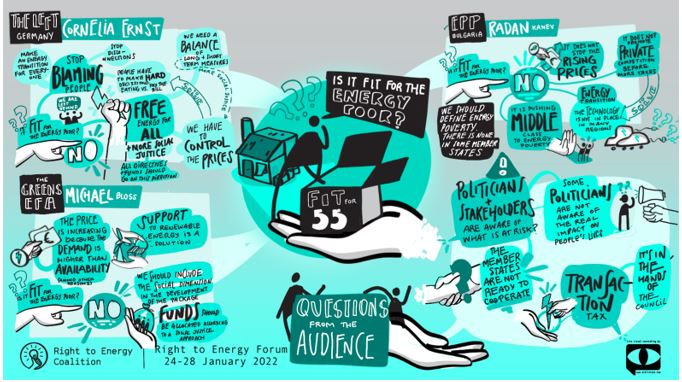 The European Commission’s commitments: from words to action for Europe’s energy poor

As always, it is important to know what direction the EU wants to go when it comes to policy-making, which is why this particular session was relevant.

This session was moderated by Colin Roche from Friends of the Earth Europe, a partner to the Right to Energy Coalition. Present was the EU Commissioner for Jobs and Social Rights, Nicolas Schmit, who welcomed all attendees and said that the green transition should be fair for all.

Present were also the president of the Transport, Energy and infrastructure of the European Economic and Cocial Committee, Baiba Miltovica, Jeppe Jansen from the Energy Poverty Advsory Hub, and representing DG ENER, one of the top EU DGs that directly deals with energy related issues, Serena Pontoglio, a team leader of the Renovation Wave implementation from DG ENER and Nikolaos Kontinakis, a policy officer at DG ENER dealing with energy efficiency, bringing their accrued experience and ideas to the panel.

The key topic discussed in this panel was how energy poverty is no longer an issue concerning only the poorest ones as even the average consumers suffer a lot in paying bills for energy heating, fuel and more. 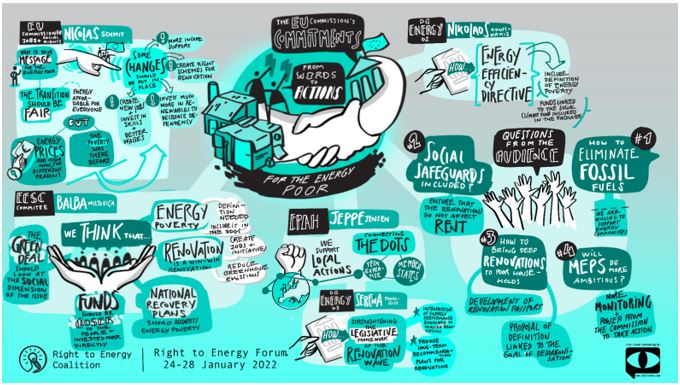 The European Green Deal is not only about economic but also about social and environmental impact. We need to figure out how to use these tools for the people to really live better, by committing to improving isolation of their homes, finding alternative sources of energy, and becoming less dependent on fossil fuels.

Many tools within the legislative framework of Fit for 55 (such as Social Climate Fund) can really help the consumers. Many of these funds are not close to the citizens, and do not reflect the fact how difficult it is to renovate for example the multi-apartment buildings. At the same time, you must go through many formalities which slow down the process of opening up the market, understanding its importance and technical aspects for renovation of multi-apartment buildings.

Local level actions tailored to the citizens are the most important when it comes to tackling energy poverty.

Why energy poverty and overall affordability in energy and housing matter

Energy poverty is more than just a buzzword, it is a reality for many people living in Europe and around the world, a reality which should not be tolerated in the developed world.

This reality has now been heavily acknowledged by the European Union, and it, together with partners, is trying to tackle energy poverty head-on with new policy packages and initiatives.

However, it is all easier said than done. As written before, there are still many dimensions of the new policies, and further technical difficulties that need concentrated effort to solve them, especially within the context of multi-family apartment buildings and their renovations.